YST episode 36 Spinning on a Charkha

I can not believe I am at the 36th podcast! It will soon be two years since I started this creative adventure.

Episode 36 of Yarnspinnerstales is all about spinning on a charkha, and this time I have two special guests sharing their experiences with their Bosworth book charkha. I also do a review of the DVD Charkha Spinning Tips and Techniques, by Elaine Benfatto.

But best of all, there is a Youtube video that not only shows spinning on the charkha but is explained in detail by my daughter. Check it out here.

A few photos just to show you the charkha. First, closed showing that it really is the size of a hard back book: 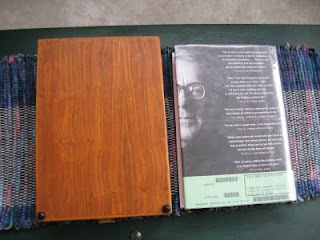 Next, the charkha opened, showing just how neatly everything fits inside: 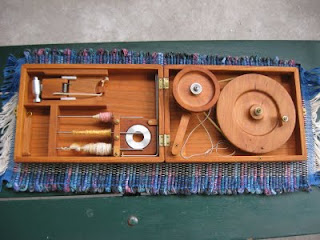 And finally, the charkha opened and set up ready to spin: 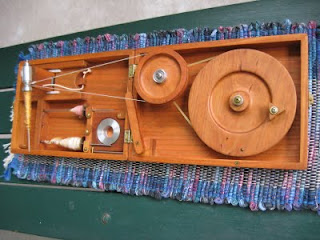 Be sure to check out the webpage for the podcast, as I have posted lots of links there that relate to spinning with the charkha.


Posted by YST at Thursday, August 20, 2009 No comments:
Email ThisBlogThis!Share to TwitterShare to FacebookShare to Pinterest

Only five items going to the state fair this year. One is my beaded mystery stole, which I have posted about before and so I will not include in this post. The second I've posted a progress photo already, the targhee/bamboo skein of yarn. I've been playing around with arty shots of yarn, so here's one of those with that skein. 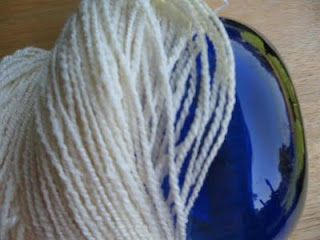 The photo has not been though any photo shop editing, which I would do before using it, if I plan to sell this yarn. Right now I haven't decided.

The next item needs more explanation. I submitted for the designer yarn category a skein of cashgora goat and silk 2 ply skein. The idea is to try and copy the Orenberg style yarn.

Here's a photo of that skein of yarn. 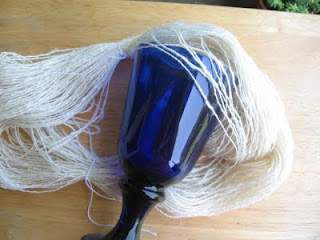 There's a number of reasons this skein does not come close to true Orenberg yarn. First, cashgora is never going to be a good replacement for the goat down used in the true yarn. Cashgora, at least what I have, is very scratchy. The Orenberg yarn I have has a bit of scratch, but not enough to be uncomfortable. I really doubt I would wear a shawl of my yarn. Second, I did not get my spinning quite thin enough on either single to make the 2 ply the WPI of the original yarn. I'm off by about 4-5 WPI. It felt like I was spinning thin enough, but the final skein after washed was not as thin as the original.

When I was plying this yarn, I did two different skeins. One I plyed with my Ashford, with the lace flyer and aimed for a very loose ply. After it was washed I had quite a few areas in the yarn where the cashgora popped out, like little tiny locks. It was a neat yarn, but not what I had in mind. So the second skein (which is shown above) I plyed on my Roberta, and went for what would be considered tradition balanced ply. I liked that yarn much better and it actually matched the look of the original yarn.

The other thing I about this skein is that I handled it differently than I have most yarns after washing. I washed the skein, hot soapy water, rinsed good, dried in a towel and hung the skein in front of a fan until it was just barely damp. Then I put the skein on the skein winder and wound it off on to my PCV pipe niddy noddy. I was putting tightness into the skein, stretching it while it completely dried, by doing this. Every now and then while it was drying I pulled on the skein so I pulled the area that was wrapped around either end was moved off the curve. I hope that makes sense, I was trying to prevent the yarn developing a permenent curve in it. The only other time I have used this method with a skein of yarn is when I do 100% angora.

The result of doing this with the skein gave a very smooth crisp yarn, with very little halo. That matched the original yarn, at least in appearance.

One of the requirements for this designer category is to knit a swatch, at least 6 inches square. I have always been very uninspired for these swatches in my past entries, so I decided to get very creative this time. Since I was trying to make an Orenberg style yarn, I went to those books I have and discovered that the Gossimer Webs Designs book had a small sampler practice shawl that would be within that size range. It took me two days of knitting and I had a wonderful time discovering the construction concepts of these shawls. The resulting swatch looked like this: 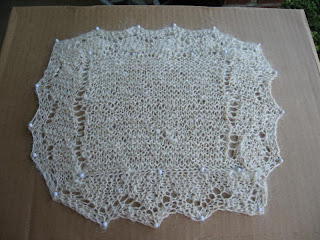 I had to come up with another creative solution to block it. Regular size shawls are blocked with wires and pins, but this little swatch seemed overwhelmed by blocking wires. First I tried pinning it to a towel, like I do other swatches and found I couldn't pull the swatch hard enough, the towel would just scrunch up underneath taking my swatch with it. So I finally hit on the idea of placing a square of cardboard on top of the something soft that pins wouldn't hurt. You could use the bed, but to make mine portable so I could prop it in front of a fan, I use a new package paper towels. The pins just pushed right through the cardboard, into the package and I soon had my swatch pinned out nice. Here's a close up: 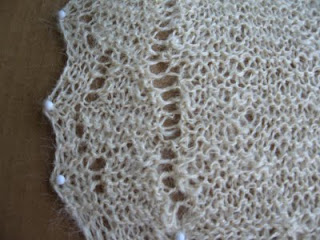 It looks so lovely and actually developed quite a halo as I was knitting. I enjoyed knitting with the yarn a lot, it actually had that crisp feeling like linen. But what that means is that the final product is sadly very scratchy. It won't soften either like linen. So while it has been a very fun project, I will not be spinning any more of this yarn. I seriously doubt the spinning judge at the fair will like the yarn either, but probably for different reasons.
The last category I submitted an entry for was to knit something in natural color handspun yarn. You even had to submit a lock of the fiber as well as some of the yarn. I used some Black Welsh Mountain handspun and the pattern Bella's Mittens (look for the pattern in Ravelry it is a free pattern). The mittens are made to go up to the elbow. 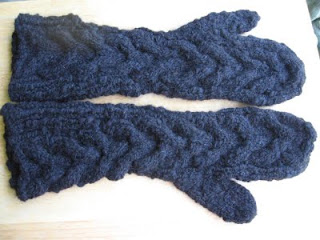 I could not get the best photos of these. The yarn is very black but looks lighter in the sunlight. Also it's a bit tricky to take a photo of one hand inside a mitten and the other hand holding the camera to take the photo. But in spite of the mittens looking like cooking mitts, you can get the idea of what the pattern is like. They fit me perfectly because I could try them on as I worked and I got the decreases to hit where they needed to be. And they will be exceptional warm this winter. 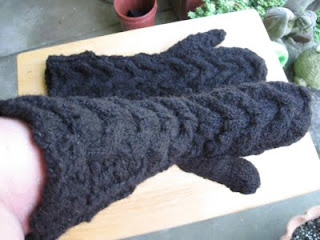 After working for many weeks with this deadline looming, I feel lost as to what to work on now!

Posted by YST at Sunday, August 16, 2009 3 comments:
Email ThisBlogThis!Share to TwitterShare to FacebookShare to Pinterest

I had several titles for this blog story, 1. The bungee jumping spider, 2. The trapeze spider, and 3. Boing boing boing. I decided since this is a fiber blog I would at least give the title a knitting slant.

I live in a very old country house and because of that I tend to 'share' my house with nature, often unwillingly. For this reason, I have learned to be very observant, and am often quick to spy the unwelcome guest.

Now this story starts with my overhead fan. On it, I have a lovely ceramic chain pull, a knob to grab and pull to turn off the fan. It's quite country looking, with a painting of a mallard duck. The ceramic pull itself is hollow in the center. So this morning, when reaching up to turn off the fan, I noticed a brown blob in that hollow center, and thought to myself, hmm dust bunny. Except the blob moved and I immediately knew it was an unwanted guest.

So I did what most anyone would do. I gave the knob a strong flick with my finger, thinking that the insect would drop out and I could deal with it better. The knob swung violently back and forth and yes, the blob dropped out, but with a surprise.

It was a knitting spider, and it was using a lifeline.

I see some very strange and sometimes outright funny things here in this country house. But nothing recently has tickled my funny bone like this high flying spider. As the knob swung back and forth, so did she on her life line, looking for all the world like a trapeze performer at the circus. But the tricks continued, as she swung she also climbed her bouncing lifeline, looking now like the bungee jumping spider. She was tucked back up into her hiding spot long before the knob stopped swinging.

I must confess, she's still there. She's not a scary looking spider, and hasn't moved all day. Maybe she finally feels like the hangover is gone. There are times when I look at that knob and get tempted to whack it again, just for the giggle, but I am kind hearted by nature. Besides for all I know, this is the time she forgot to put her lifeline in her knitting.
Posted by YST at Friday, August 14, 2009 2 comments:
Email ThisBlogThis!Share to TwitterShare to FacebookShare to Pinterest
Newer Posts Older Posts Home
Subscribe to: Posts (Atom)