Blending with a hackle

The newest YST podcast, Episode 57, has just been released here, or on Itunes as yarnspinners tales. In it I talk about my experience blending fibers with a hackle.

A hackle looks like a comb, but really is not a fiber processing tool at all. The fiber you use with a hackle should already be in a 'ready to spin' state, because once loaded on the hackle you will pull it off, no combing. So whatever state your fiber is in, will pull off in the same state, or if it is not well prepped, be hard to pull off.

The best use for a hackle is to blend similiar length fibers into a top for spinning. In my experiment I was using a merino top and a hand carded dyed angora fiber (the blue in the photo). So the fibers do not have to be top to be used, roving is fine.

The fibers are laid onto the hackle exactly like you would load a comb. Layer the different fibers however you want. The photo below shows both the fibers loaded on the hackle and being pulled through a diz. That process is also exactly like you pull fibers off of combs after combing. So if you are already familiar with combing, you will not have any problem at all using a hackle. 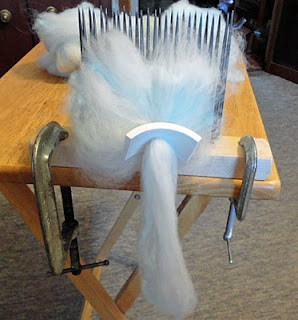 A photo below showing the pulled off top. 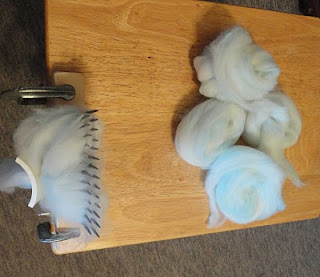 I loaded more angora to that bottom top, which is why it is showing more blue.
Several questions come to mind as I write this. Could I use that hackle as a comb base? Well technically yes, but it wouldn't be good for two reasons, one you can not rotate the hackle like you do combs, and two you have to have a comb any way for combing on it, which means why use it for combs when you have combs. I suppose you could load not well prepped fiber on the hackle, comb it with a small hand comb across the hackle and then pull it off. It would help those that only have small hand combs to comb a larger amount of fiber at one time.
Second question, is a hackle really worth the price? I think mostly not really for most spinners. However there is one nice aspect to it, you can control just how thick or thin you pull off your blend by using a diz with different size holes. It would enable the spinner to spin very fine yarn for lace weight from the blend.
Last question, why not just do the blending on large combs? The main reason not to is that most large combs have more teeth in descending on them, as in the five pitch combs. This is necessary for the processing of combing out all the shorter fibers when you are prepping the fiber. That is not really the goal with the blending process. In fact there is actually waste left on the hackle, surprising for having already prepped fiber. Trying to blend on five pitch combs with increase that waste to probably unacceptable levels.
But basically the hackle is a simple to use but very gratifying tool for the spinners toolbox. There are endless variations to play with when it comes to blending fibers before spinning them, and that is what makes this process so much fun.
On a personal note: did you notice the better photos in this post? I got my much needed improved digital camera, and went through the learning process of how to use it for this post. I bought a Sony Cybershot and I think I am going to really like it.

Posted by YST at Sunday, January 30, 2011 No comments:
Email ThisBlogThis!Share to TwitterShare to FacebookShare to Pinterest

In my podcasts Yarnspinnerstales I have been discussing color. Episode 54 and 55 were both on color theory and episode 56, just released is about the results of blending of the fibers I dyed. The most recent episode can be found here

My experiment started back last fall when I decided to do a two day dye day. One of the projects during that time was to dye fiber as close to the tertiary colors of the colorwheel as I could get. There are six tertiary colors on the colorwheel, shown in the photo below, starting with and going clockwise, orange red, red purple, purple blue, blue green, green yellow and yellow orange. 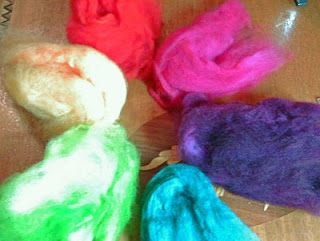 Now I will be the first to admit, it's a terrible photo, it was a very cloudy day, and I over compensated by putting too direct of a light on the samples. But there is also the fact that I was 'trying' to get the tertiary colors, and that of course meant mixing dyes, allowing for great variations. However, I got lots of fun colors, reasonable close to the concept and went on then to try and decide just how to use the fiber.

I dyed 2 oz of each color, and my first thought was to just spin the six colors, plied with themselves and knit a colorwheel shawl (circular with the colors in pie segments). I became somewhat daunted by the planning in the knitting, so I decided to change my idea to a rectangular shawl, and have the colors progress along the rectangle, one edge to the other. My first visual thought was to start with the yellow at one edge, and put each color in turn as I knit. I figured I would just overlap the two adjacent yarns to ease the transition.

There's two problems with that idea though, first the overlap area would be doubled yarn, and second it's still the jarring appearance of these distinct colors next to each other. I decided a secondary common color was needed to go between the sections of tertiary colors. Black? Gray? Brown? And needing to find a common fiber, superwash merino in that fiber to spin made me go one step further in the thought process. What if I got the common color by blending the existing colors.

And thus the blending podcast was born.

The photo below are the three groups of two that I put together, grouping the purple/reds and the blue/greens and the orange/yellows. 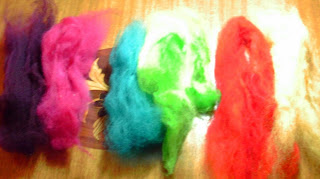 When blended I got lovely batts, but still very distinct and vivid colors. (Sorry the photo below is the opposite of the one above in orientation).

And of course the yarns looked the same. Lovely colors, nice depth but not what I need for the project. I have enough variety of color already. 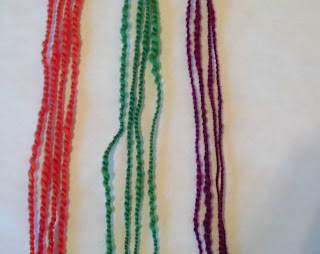 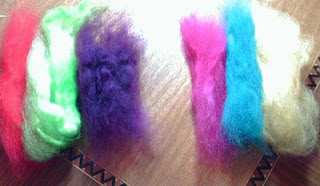 When carded to blend I got very blue and orange looking batts (again these are opposite to the above photo). I really loved the blending in the batts, they are exciting looking. 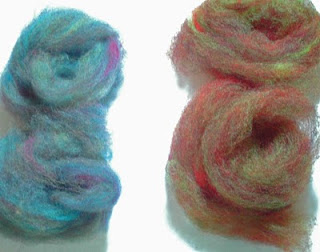 The yarns of course look very similar to the batts, showing mainly blue or orange in the colors with sparks of the other colors. 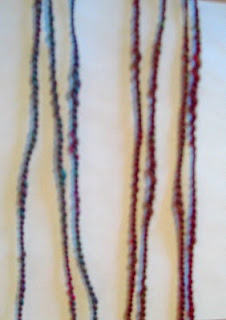 Finally I decided to try a blend of all six colors. Now having actually learned something from Deb Menz's book, I knew to get a balanced yarn when using all six colors, I needed to follow the proportion theory. Basically long ago very learned folks in color theory figured out that if you want to combine multiple colors, some colors will present stronger than others. If you want to present a combination that looks balanced you need to use less of those colors and more of the ones that do not present as strongly. I finally had my answer to just why, a little yellow goes a long way in any dyeing or spinning project.
The proportion numbers are given like this:
yellow orange red violet blue green
3 4 6 9 8 6
It does not matter what unit of measurement you use, as long as each color is measured by that unit. So three of x units of yellow are combined with 4 of x units of orange, etc.
Now I was just doing a sample skein, and was working with less than 1/8 oz of fiber, so I just eyeballed the ration by putting the smallest amount of yellow up to the largest amount of the purple blue.
Here's what it looked like before I carded it: 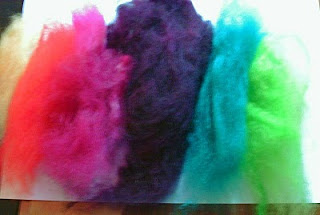 And then, after carded for three passes (mixing the fibers as well as possible): 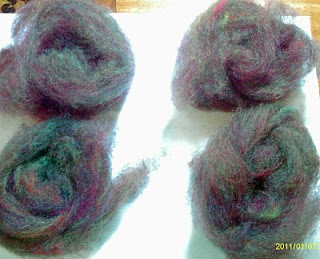 Really cool colors and finally getting something close to what I could use as my connecting color in the shawl.
The yarn looks purple brown from a distance (this is called optical blending in color theory) but if you look at it closely, you see specks of all the colors now and then. It's a very exciting yarn and certainly one I would love spinning. 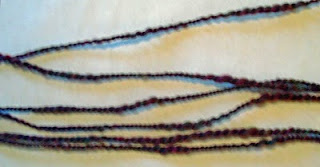 I still have not made my final decision on the actual shawl design. If I use fiber to make this intermediate yarn, I may not have the quantity of the other colors to present a balance of each of the six colors. So I may scale my project down to a scarf size to allow the balance, or come up with another design. Still thinking.....
CW