I have spent a lovely week of carding and spinning some angora fiber, to record and publish this month's first podcast. Since I have already done a podcast on grooming a rabbit and collecting the fiber, I thought I would continue that process and talk about ways to spin angora fiber.

Did you know that rabbits come in dyelots? I talk about that and other hopefully helpful ways to process and spin that angora that has been lanquishing too long in your stash.

The podcast can be found on my website yarnspinnerstales or by subscribing through ITunes.

Even if you don't listen to the podcast you may enjoy the pictures below, of some of the angora goodness I have been doing.

It is very easy to card angora fiber on hand combs. This is a picture of white french angora fiber, carded and partially rolled off of the hand card. 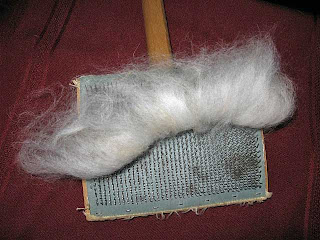 One way to make angora fiber go a long way is to blend it with another fiber. This can be done with hand cards. Here is a picture of silk and satin angora fiber (top of picture) blended with the hand cards into rolags (middle of the photo) and spun into yarn (shown on my very low tech you know what tube). 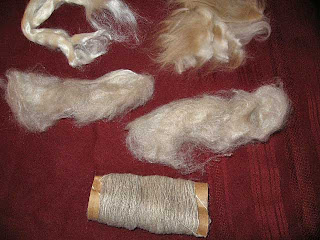 Larger amounts of angora fiber can be carded into batts on drum carders. It is recommended that you use a drum carder with close set teeth, such as the Patrick Green carder with the fur drum that I use. 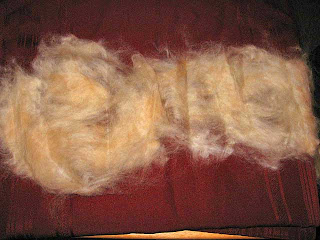 Storing carded angora brings up the issue of keeping it from clinging to itself and other items, like baskets or other fiber. To solve this problem I came up with taking the batt from the carder and rolling it on tissue paper. These inside out angora 'burritos' can then be stored in a gallon ziplock bag, lightly zipped closed. 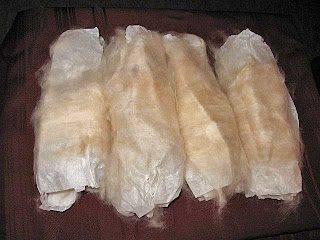 For the spinning podcast I used an agouti French angora rabbit's fur, shown here. These's are actually what I consider 'seconds' since the fiber is sort of a jumbled mess, instead of laid out in nice locks as it is plucked from the rabbit. Don't let the word seconds fool you though, it is still a very wonderful collection of fiber. The agouti is a name given to a rabbit that has brown tips on the fiber which turns into a gray color, the closer you get to the base of the fiber (by the rabbit's body). 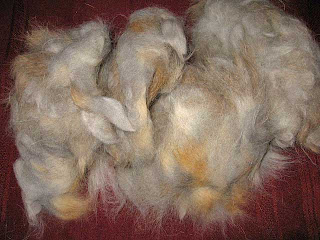 The standard photo of the fiber being spun: This is on my Ashford wheel with a lace flyer adaptation. 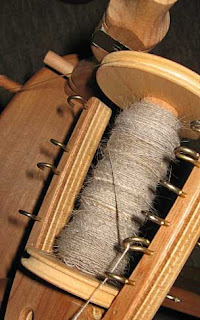 I spun both uncarded and carded fiber so I could try and show the difference. The uncarded fiber yarn is shown first, below. It is a slubbier yarn, but still very wonderful. 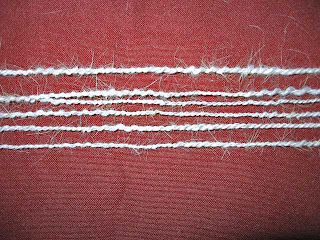 Finally the full skein of 100% angora, carded. This skein weighs 1 oz exactly and has 85 yards of 2 ply. I can not express how much fun I had spinning this skein, it's been a long time since I spun angora, and I still smile everytime I pass by the table and look at that skein. 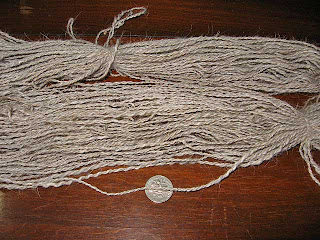 PS. I am sorry to say that both my angora rabbits and myself are officially retired from any retail angora business. Please don't ask if I have any for sale. The answer is no. Google for a local angora rabbit breeder and contact them. I know from past personal experience they will be very happy to hear from a spinner.
CW


Posted by YST at Thursday, January 17, 2008 4 comments:
Email ThisBlogThis!Share to TwitterShare to FacebookShare to Pinterest

It's the trendy thing to do, don't you know, thinking globally and buying locally...

Last weekend we went on a mini get away in Indiana, only to find many of the places we normally visit were closed, probably due to exhaustion from retail hell of the holidays. So I suggested a trip out to Sheep Street, located just outside of Morgantown Ind. They use to have just a store front, and mostly yarn, but several years ago, they had moved into the countryside, started raising sheep and had opened their shop on the farm.


The store is lovely and has a very large selection of commercial yarns. When I got there, the place was full of knitters, it turns out that Fridays are a get together day for many of the local knitters at the store.


I am not on a yarn diet as many bloggers are currently trying, however, I really did not feel in the mood for more yarn. The only slightly tempting yarn was a commercially spun blend of Sheep Street's own fiber, and it was a lovely handspun looking yarn. But it's so close to exactly the type of yarn I spin, that I could not spend the money on it. So I walked on by the beautiful displays of yarn.


There are many tempting looms there also, which I managed to rush by without being snagged into wanting to try any of them. One shuttle throw, and all would be lost, and I would have dreams of weaving. No, I shut my eyes and put my hands in my pockets, and strolled by as quick as I could, only to run smack into this: 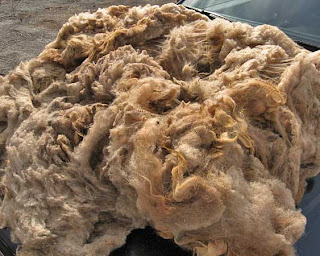 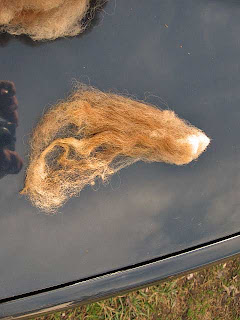 OK it wasn't actually spread out on a car hood at that point, I did that today to take the pictures.

I spent some time talking to Nancy, the owner and found out that they currently have over 100 sheep, and they are mostly shetland. So they now have expanded the business to include lovely fleece for spinners.

I really am not trying to be on a shetland kick (for many years it seemed the only fleece I purchased was border leicester). I have been combing the black shetland fleece this fall, and wouldn't have minded working with a different type of fleece. I just could not resist the color and length of lock and softness of this fleece.

So I have yet another fleece to process. I think I have around eight now, in various stages of processing. That's actually a good thing, if I get tired of shetland (oh my, how could _that_ ever happen!) I can work on the cormo, or black welsh mountain or....

As we walked out of the store, 5 lbs of fleece in hand, I thanked my hubby. He asked what for, and after a brief pause to think, I said: For letting me support the local fleece producer.