First a photo of all five locks: 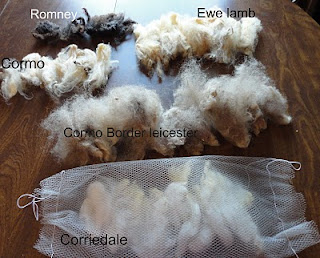 As you can see, I picked a variety of staple lengths for this study. I figure they would all be about the same as far as washing. The selection of the different lengths was more for the later study when spinning them.

A closer look at each of the locks. In the top of this photo is Romney, dark brown in color, locks very short and in 1 inch or so clumps. Below that are Cormo locks. These locks in my opinion were going to be the hardest to wash. First of all cormo is genetically related to merino, and so will have high lanolin content. Second, the crimp is tight, holding in that lanolin. And finally the clumps of locks are also tight. All these factors make this fleece require special handling as far as processing. However it should be worth it as the micron count of the fleece is very fine and the fiber is very soft. 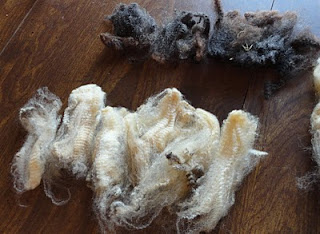 This next photo shows locks from an unknown breed. It was just marked as from a ewe lamb. However it had such nice distinct locks that I decided to include it in my experiment. Staple length is much longer than the two above, but about medium length over all. 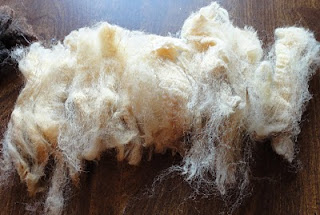 The next photo shows locks from a Cormo border leicester breed. This is an unusual combination but the shepherd was trying to come up with a fleece that had the softness/fineness of cormo with the staple length of the BL. It does have the nice long locks, like a BL fleece, but lacks some in the softness. It looks white in the photo but is actually a very creamy tan/brown color. 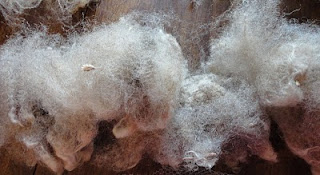 Finally, the longest locks, shown below in the washing bag is from a Corriedale fleece. 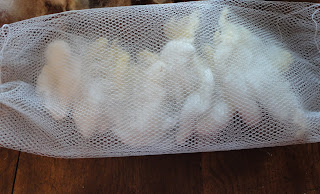 This is not really a bag, but nylon net that I cut into a rectangle, laid the locks out on and then rolled up. I realize now that I didn't catch the ends of the bag in this photo, but what I did was take crochet cotton thread and a large eye needle and just stitch up both ends, with a very wide running stitch. I left plenty of each end of the thread and did not knot it. That way after I was done washing the locks I could just pull the thread out, open up the bags and remove the locks. I can reuse the nylon net over and over for as many times as I want to wash locks. Rolling the net around the locks keeps them intact through the washing process.

I cut the nylon net to a size that would lay flat in an old oval roasting pan. In fact I used two roasting pans for this process. After I had all five breeds rolled and stitched up into their bags, I filled two roasting pans with water and a couple drops of Dawn dishwashing soap and heated them to boiling. I drew very hot soapy water into my sink, and put the bags into that water first. This prewetted the fibers, and removed the dirtiest part right away. After the roasting pan's water was boiling, I turned off the heat, and transferred the five packets of wet fiber from my sink to the roasting pan. I did this by clothes pinning the five packets together at each end, and picking the packets up all at once by the clothes pins, letting most of the dirty water drain out, and then whoosing them over to the roasting pan, dripping all the way. Ah well, it was time to mop the floor anyway. I let the packets soak in the roasting pan, still clothes pinned together for 15 minutes, picked the packet up, let it drain, and put it into the second roasting pans hot water, this time taking off the clothes pins. After another 15 min soak, I took the roasting pan to my sink, gently poured off the water, drew hot water without soap and slid the bags into the rinse water. I rinsed a second time, let the bags drain as much as possible and then rolled them individually into towels. When I unrolled them, I was surprised how dry they felt. I laid the bags out on my usual fleece drying mesh rack and they were dry in several hours, although I left them alone for a week before actually combing them, just to be sure.

All five breeds washed well with this method, although as expected I feel just a slight tackiness to the cormo indicating there may still be some residual lanolin. This method does not remove any vegetable matter in the locks, however once they are free of lanolin that generally falls out when combing. I really liked this method of washing locks. The only word of advice I would give is to be sure and not put too many locks in the bags, and to not rush the soaking process. But following this method does keep the locks intact, no matter their size or length and with gentle treatment will not felt the fiber at all.
Posted by YST at Wednesday, April 06, 2011 No comments:
Email ThisBlogThis!Share to TwitterShare to FacebookShare to Pinterest
Newer Posts Older Posts Home
Subscribe to: Posts (Atom)