I have discovered it makes a big difference to only have a dozen angora rabbits, compared to the 30 or more that I use to have in my barn. It was a matter of several days, for two hours at a time, to get everyone free of their winter coats and ready for the warmer weather. I added to the ease this year by clipping the coats instead of plucking. I would not do this in the past, when I wanted the fiber to sell. I still believe plucked angora is better for spinning and would only sell plucked fiber. Clipped angora can have short bits in it and is uneven in lengths. Plucked however is harder on the groomer and the rabbit. So to give us both an easier spring I used scissors on everyone. So for the first time I really can call it a spring clip.

Here are a few photos of the fiber. I wanted to photograph the whole clip as one photo, but it just would not fit and give the detail. As it is, the photos still do not show well the sheen of the satin fiber. I love both the French and Satin fiber, but for two different reasons. The French fiber is just plain luxury to spin and easiest of all the angora to spin. The satin is hard to spin, but if it is spun as a 100% skein the resulting yarn just shines plus has a halo. It is a very unique and lovely yarn. 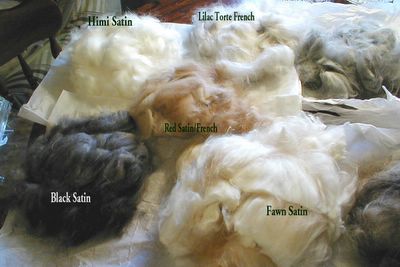 The himi satin looks white, but in truth has a brown tipping to many of the fibers. The rabbits (I have two) are unique in that they have blue/grey eyes instead of the red eyes associated with white rabbits. Also the brown coloring changes with the weather so in colder weather they will be browner and lose it in the summer. I don't see a very drastic change on my rabbits, they tend to be in a moderate temperature year round, by living in the barn. And the rabbits always 'look' white, the coloration is just in the tipping. It has to be taken into account though when spinning the fiber, it will not look white when spun.

In the middle of this photo, the red fiber, is from the only mix breed rabbit I have left from a breeding project I had started. The goal was to get the longer french fiber into the satin, and to get the intense red of the satin into the french. One very large litter was born from that mix breeding and most found homes with other breeders because they had more intense red coloration. Since I then decided I had to cut back on the rabbit business, I did not carry the genetic line any further. The plan had been to take that first generation and breed back to type, satin to satin and french to french. It would have taken five generations to be considered pure back to type, so it was a long term project. I would have enjoyed it too, however my life demands more travel time, and I just had to put rabbit breeding aside for that reason.

The black satin fiber is as awesome as it sounds. I dearly love that black rabbit, a very shy male that I have had for three years now. The clip was the longest coat I have seen him have, and it was easy to trim. Often satin can be very short, but the winter weather must have encouraged more growth, because most of my satins had longer than normal for them coats. 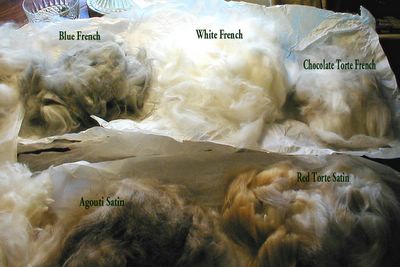 The top three are my major french rabbits. The blue is the pet called Reboot because my daughter found the baby out of the nest, warmed her up and she lived. She is a monster rabbit now, well over 10 pounds, probably not real healthy for her, but I get a major amount of fiber from her on a regular basis. I have used the blue angora as trim for items knit from grey wool fiber (CVM mostly) and the two colors look wonderful together.

The chocolate torte is another wonderful color to spin. The yarn is very tweedy in appearance, browns, reds and greys. That's because the coloring on the fiber shaft goes from an almost white base to a deep red/brown tip. I must confess I have dyed angora, but usually feel there is no need, the natural colors are my favorites. 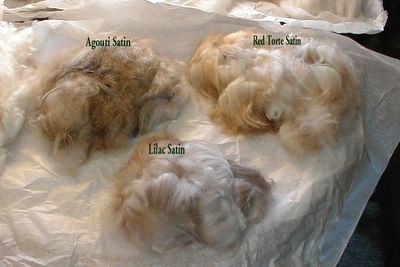 There is one coloration problem on this photo, I seem to be unable to get a photo that didn't put a red tint to the lilac satin at the bottom of this photo. If you saw the fiber in person, it is a true white base and silver tipped fiber. The two satin fibers above it in the photo are so red, I suppose the color is reflecting on the lilac.

I realized as I looked at the rabbits in my barn now, that I have equal numbers of french and satin. And also that this number of rabbits is perfect to keep me a supply of angora to spin. I think I have finally reached a nice balance between necessary work and fun for this rabbit hobby.

CW
Posted by YST at Tuesday, April 26, 2005 2 comments:
Email ThisBlogThis!Share to TwitterShare to FacebookShare to Pinterest 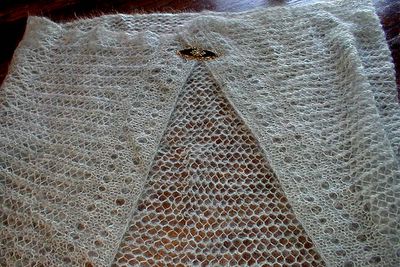 This is a shawl I have been working on for almost two years. It's not that it's hard, I just put it down at one point because I was bored with it. And I do not like to work with the mohair in the summer, so that meant setting it aside at that time of the year too.

I am very happy with it though, and plan to wear it and show it off often.

The yarn is made by Adriafil and is called Touch. It is super kid mohair, nylon and a bit of wool. I used two balls and carried two strands while knitting.

The pattern is very simple. This is a rectangle shawl and I used size 10 1/2 needles to get the very lacy look. I cast on 74 stitches, but any number which will allow the pattern to be worked over 3+2 will work. The 3+2 means that each end stitch (the +2) is knitted and the 3 pattern is k1, yo, k2tog across the row.

There is a border pattern on each end of the rectangle that really adds to the shawl. It is 17 rows, knit rows 1-5, then a row k2, *k2tog, yo* repeat between stars until last 2 stitches which you knit. Then knit rows 7-11, do the lace row again (row 6) and knit rows 13-17. It looks very nice for such an easy pattern.

I plan to wear the shawl with a large pin gathering each end in the front. The size is just right for it to then fit across my shoulders and being so fuzzy, it stays in place. However, I doubt I can wear it over a dark color, it will shed on the clothing underneath unfortunately.

CW
Posted by YST at Wednesday, April 20, 2005 3 comments:
Email ThisBlogThis!Share to TwitterShare to FacebookShare to Pinterest

A trip to the Fiber Fair yesterday was an unexpected surprise in my week. For more than a week both my husband and I have had bronchitis, and had only the energy to move from one sleeping spot to another. But this Fiber Fair has been a part of our lives together since we met. For the last eight years we had a booth selling angora fiber and had made many friends. So when he asked yesterday morning if I felt up to a ride and visit for the Friday evening opening of the vendors booths, I said yes. The sun was shining, it was an easy drive on freeways, and we made good time.

Walking into the front door and not seeing our booth there was very nostalgic. I still feel I made the right decision not to vend anymore, and feel full of possibilities of things to try with this fiber hobby. There is no way around missing the fun parts though of what we had done all those years.

Friday evening is a great time to go. There are still very few crowds on Friday evening, so shopping is a pleasure. I could spend as much time talking to those friends as I wanted without the distraction of customers, theirs or mine! Most of these friends I only see once a year. There were some surprises. Nancy of Sheep Street has moved from her main street store location in Morgantown, and bought acreage. Her store is on the farm and they now have over 50 sheep of various breeds. A rabbit breeder friend is selling all her rabbits this spring and her farm and moving to Tennessee. Several long time vendors like me, called it quits this year. New vendors take their place, and the number of them continue to grow. Greencastle is a serious fiber fair and worth anyone's time to visit.

I walked all three vending areas twice. I never got to do that before. Here's a picture of my best find: 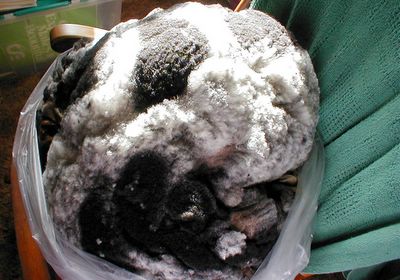 The picture really can not do justice to how lovely this little Jacob lamb fleece looks and feels. I do not plan to try and separate the colors at all, just spin it by the washed handfuls and make a yarn full of that tweedy goodness. Although the cut area sitting on top in the photo is very distinctly black and white, the locks of fiber all go from a very white tip to brown to gray. There's no real hint of that distinct black and white when one looks at the lock as a whole. It's going to be very interesting to watch the yarn develope as I spin.

Here's a picture of a lock. It's about 4 inches in length (sorry I forgot to put a ruler next to it). 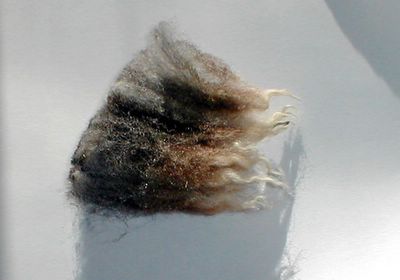 I bought two books, Cat Bordhi's A Treasury of Magical Knitting and Galina Khmeleva's The Gossamer Webs Design Collection. I was looking at that last night, and I love the dictionary of motifs that this book includes. She shows them as squares with the motifs in the center, and I just thought what a lovely afghan could be made, say in baby weight yarn for a little baby girl, using these motif squares. Of course the shawls are always stunning and a goal for me is to knit one someday.

And for a lack of anything else to call it, my husband and I both got Jensen spinning wheel fever. I saw the wheels briefly last year, and of course had no time to really look at them. This year I was invited to take off my shoes and try one, so I sat down at the $1500 production wheel. It was double treadle, something I had always thought I would not like. It's big, something else I had avoided in wheels. But it was smoooooth, silent, and just absolutely lovely to spin. I felt I was sitting just a bit too low, but that would be a matter of the right chair, since I had to use what they had in the booth. The wheels are made of solid cherry, and are as beautiful as any good piece of furniture.

What surprised me was how taken my husband was with the wheels. I expected a response of, oh you have three wheels already! That fact was never mentioned, only talk of family heirlooms
Posted by YST at Saturday, April 09, 2005 1 comment:
Email ThisBlogThis!Share to TwitterShare to FacebookShare to Pinterest
Newer Posts Older Posts Home
Subscribe to: Posts (Atom)