I am still putting out the spinning podcast, I just have not put a post here for each one. So there are two for January, and one so far for Feb. They can be found here or by subscribing to Yarnspinners Tales on Itunes.

The topic for the January technical podcast is spinning and dyeing silk. I talk about the different forms of silk and how to spin them. I even have a Youtube video here, to show how to get a silk hanky ready to spin. In the second part of the podcast I talk about my experiences with dyeing silk.

January's spin-in topic is about the fiber cashgora, the goat breed that it comes from and also my comments about spinning some of the fiber. I thought I might try and make an Orenberg-like yarn, using one strand of cashgora and one strand of silk single. That project is still in progress, I have a bobbin full of the cashgora so far. I am spinning it on my Ashford with the lace flyer. There's also some upbeat music to listen to as you spin, as well as my tale about keeping my balance, both on the ice and in my life.


The latest technical podcast talks all about woolen vs worsted style of spinning, how to prep for each as well as the actual spinning technique that makes the yarn either woolen or worsted.
Posted by YST at Friday, February 20, 2009 No comments:
Email ThisBlogThis!Share to TwitterShare to FacebookShare to Pinterest

I still only have one major knitting project going. It's like candy to me, I just have no desire to knit on anything else but this: 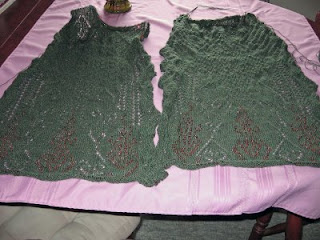 It was previously known as Mystery Stole 4 and now has been named the Serendipity Stole. It's designer is Georgina Bow and here is where you can purchase the pattern from her.

The designer released six clues in all, and the pattern called to knit two separate parts following clues 1-5. Then clue 6 is knit only once on one of the halves, and will serve as the center of the stole. I am currently knitting clue six, and am happy that it includes beads. I find I love adding beads to the knitting, a surprise because I always figured I would hate the break in the rhythm of knitting. But I don't and the look of the beads on the lace is so appealing to me, I will be looking for other patterns to do again.

I also am in love with the yarn, Knit Picks Shadow in the color Lost Lake. It's a 100% merino, in lace weight. You know how knitters joke that if you are getting close to the end of a ball before the end of a pattern, you should knit faster? Well, I am at the opposite of that, I have lots of yarn, and not much pattern, and I am finding I knit slower, to make it last. Maybe after seeing the center, I could add another 'center' to the other end? I mentioned to hubby that I was almost done knitting it, and was sad about that, and his comment was, 'it's time to be done.' I guess he is getting tired of seeing the same knitting in my hands.

It's very hard to get a good photo of how wonderful it looks. I hope once I get it put together and can block it, I will be able to photograph it in all it's beauty.
Posted by YST at Sunday, February 15, 2009 2 comments:
Email ThisBlogThis!Share to TwitterShare to FacebookShare to Pinterest
Labels: bead, stole
Newer Posts Older Posts Home
Subscribe to: Posts (Atom)